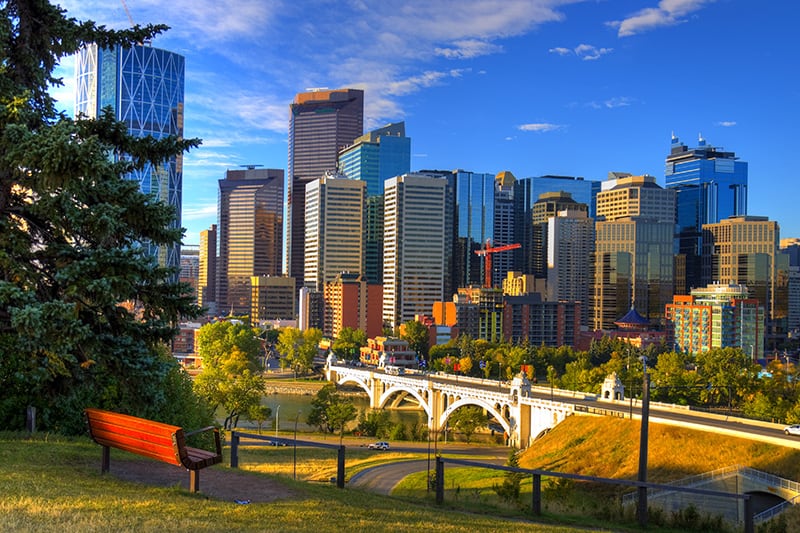 We lived in Calgary and the area for many years, back when the city was primarily known for just a few things: the oil industry, Stampede, and steakhouses. And while those things are still an important part of the city’s fabric, on every return visit since we left in late 2009, we always marvel at its evolution.

We have many friends still in the city and find ourselves there often to visit them or to take business meetings, and there are so many things to do in Calgary. So in every spare moment we have, we endeavour to explore something new. We’ve taken many photos at many angles of the dynamic Wonderland sculpture. We’ve done the same with the Peace Bridge, checking it out at both the first day’s light and at dusk. Just recently, FINALLY, we walked through the stunning new central library. We’ve eaten at so many fantastic new restaurants (although it is hard to pull us away from our major fave – Native Tongues); the magnitude of the explosion of exceptional eateries in the last decade is sometimes hard to fathom. But it happened, and the culinary scene alone is doing a lot to pull people in.

There is, however, so much more to see and do. Calgary is a city that is constantly evolving, and its prime location also makes it a perfect base to explore diverse neighbouring regions.

The land on which Calgary is located on is the traditional territories of the Niitsitapi (Blackfoot) and the people of the Treaty 7 region in Southern Alberta, which includes the Siksika, the Piikuni, the Kainai, the Tsuut’ina and the Stoney Nakoda First Nations, including Chiniki, Bearpaw, and Wesley First Nations. The City of Calgary is also home to Métis Nation of Alberta, Region III.

The city of Calgary started as a North-West Mounted Police fort called Fort Brisebois (and eventually Fort Calgary). It was built in this area because of the importance of the meeting of the Bow and Elbow rivers. Calgary was incorporated as a town in 1884, and then a city later in 1894. Initially a small town, the population saw significant growth when the Canadian Pacific Railway finally connected Calgary to Eastern Canada in 1883.

Only 18 years after becoming a city, the first Calgary Stampede was hosted by Guy Weadick. The Greatest Outdoor Show on Earth has only continued to grow since then! Calgary had its start as an oil city after multiple Southern Alberta oil strikes in 1914, 1920, and 1947. Though this is what shaped Calgary as the fastest-growing city by the ‘50s, the city was also known for its arts and education with the inception of the Glenbow Museum and the University of Calgary in 1966. The cultural importance of this city continued to grow in 1988 when Calgary hosted the 1988 Winter Olympic Games – earning its reputation as a hot-spot for international travel.

Boasting a population of 1.37 million people, Calgary is the largest city in Alberta. Calgary’s altitude is 1048 meters above sea level and it is only 80 kilometers East of the Rockies. Still sporting its long-held nickname – Cow Town – Calgary is a modern, urban city built out of Western tradition.

How far is Calgary from Vancouver? Driving from Vancouver will take you around 10 hours, as it is 971kms away. We recommend splitting up the drive and taking in some of the sites along the way like Kamloops, Revelstoke, Golden, and Banff!

The Calgary International Airport (YYC) is a busy one with many connections, making it an easy way to get there. Getting into the city from the airport is possible through public transit, rental cars, and shuttles.

Multiple bus companies have stops in Calgary (it’s easy to compare them on Busbud, but here are a couple of our favourite options):

Calgary is great to visit at any time of the year, with many activities to keep you busy year-round! Visiting from June through August will ensure days full of festivals and a beautiful river valley setting. Longer days in the summer are also something to take advantage of. And don’t forget about the world-famous Calgary Stampede that occurs every second-week of July.

Calgary in winter can also be a delight. While there are guaranteed to be a couple of weeks where the city is in an inhospitable deep-freeze, warm chinook winds off the mountains can also melt it all and sometimes bring temperatures into summer-time range. Being within range of the mountains (about 1 1/2 hour drive from Banff!) also means that day trips to popular ski slopes are also possible.

Calgary has lots of places around the city to stay. Whether you’re looking for an experience or just a simple room – there’s something for everyone. Here are our picks:

Sights to See in Calgary

This Calgary park is a hub for cultural activities in the city. Catch some Shakespeare in the Park hosted by Theatre Calgary, and the popular Calgary Folk Festival is held here in late July. You can dine at the sublime River Café, or just enjoy a picnic in the grass and watch the wildlife go by! Eau Claire Market is close too, which is great for some local shopping.

This eye-catching red bridge was finished construction in 2012 and quickly became an iconic Calgary sight. It stretches across the Bow River connecting Memorial Drive and Eau Claire Park. Take your time and enjoy some people watching and photo-taking!

This library is known for so much more than its books! Opened in late 2018, it was quickly noticed as an architectural marvel, even being recognized by TIME magazine as one of the 100 Greatest Places of 2019. Take pictures outside and inside this beautiful building (which is also the new hot-spot for graduation photos in the city). The central library also offers free use of their computers, meeting rooms, and more.

Don’t miss this 12 metre-high metal sculpture in front of The Bow, the tallest building in Calgary. You can walk right through the sculptured, mesh share of a girl’s head and get a new perspective on downtown Calgary.

Things to Do in Calgary

Calgary boasts a wide array of festivals to please any interested goer. Top events include:

The Calgary Zoo is the city’s top tourist attraction, located right near downtown, and is a great place to spend a day with the whole family. The Zoo is home to nearly 1,000 creatures across 119 species, and their mission is to become Canada’s leader in wildlife conservation. Not only is a day visiting animals most impressive, but scheduled activities are also a big draw, including the popular ZooLights surrounding the Christmas season.

Raft on the Bow River

The Bow River originates in the mountains and runs through downtown Calgary. A perfect summer afternoon can be spent on a raft floating down the gentle river! Rent your own raft or go with a tour guide so that you can just sit back and enjoy the cityline views.

There’s always something to see at the Glenbow Museum. Learn about the history of Alberta, explore the West African collection, and check out the rotating exhibit that always prove to be popular! The Glenbow always has an eye for great artists.

Originally a venue for when Calgary hosted the 1988 Olympics, Winsport (formerly known as Canada Olympic Park) is a hot-spot for sports in the city. In the winter, you can ski and snowboard within city limits, or even try hurling yourself down the Olympic bobsled track. In the summer, the hill is used for mountain biking and the Monster Zipline where you can reach up to 120 km per hour!

The National Music Centre lives in Calgary! This is a place for music lovers to explore (and love). Studio Bell is centred around four pillars – exhibitions, artist development, performance, and education. Catch concerts, interactive activities and a guided tour at the can’t-be-missed building.

The TELUS Spark science center is a place for the curious. It’s fun for kids and adults alike, where all can embrace their desire for exploration and discovery in science, technology, math, and art. Fun fact: In 2018, it set a Guinness World Record for largest functioning Rubik’s Cube!

Take on these beautiful hiking trails right in the heart of Calgary! Nosehill Park boasts being one of North America’s biggest urban parks, taking up an area of over 11 square kilometres. Take in beautiful views of downtown and enjoy getting out into nature (without having to go very far).

View Calgary from this iconic landmark, a 190.8 meter free standing observation tower.  Have a bite to eat in the Sky 360 Restaurant and Lounge, stand on the Observation Deck to see a panoramic view of the city (not recommended if you are afraid of heights!) and browse the gift shop which features unique Calgary Tower memorabilia.

Narrowing down the list of restaurants to visit in Calgary is tough; in the last decade it has earned its place as a top foodie city in Canada. With the number of breweries and funky hole-in-the-wall restaurants increasing every year, you’ll have to make a couple of trips to try it all! Here are our top picks:

The city of Calgary has so many things to offer and also serves as a perfect base for multiple day-trip opportunities. If you are itching to get out of the city and see more of what the province is about, you can’t go wrong in any direction. Here are some of our favourites:

By far the most popular day trip from Calgary is to head to the mountains and experience the mountain resort town of Banff (as well as Canmore, which is on the way). It only takes about 1.5 hours to get there (see our Calgary to Banff route guide which covers all of your options and activities along the way). From hiking to shopping to skiing and more, there will be plenty to keep you busy. For what to do when you get there, check out our Banff destination guide.

The town of Sundre sits in the foothills of the Rocky Mountains – the peaks are still visible but this spot offers more of a flavour of the wild west. Full of ranchlands offering horseback riding to explore more of the terrain, this area is for nature enthusiasts who can appreciate the cowboy traditions that helped shape Alberta. Enjoy camping, white-water rafting, some good eats, and more.

Many are surprised to find a world-class distillery south of Calgary but to those who are privy to the gems south of the city, a day trip there is a no brainer. Learn about the cowboy history of Alberta at the nearby Bar U Ranch, and also make a pit stop to see the natural phenomenon of the Okotoks Erratic. There is a lot to see in just one day!

Head east from Calgary to step back in time (by millions of years)! Steeped in history, the Badlands of Alberta take you back to the time of dinosaurs which you can hear more about at the iconic Royal Tyrrell Museum in Drumheller and Dinosaur Provincial Park. The landscape east of Calgary is something out of an old spaghetti western and tales from back in the day can be heard at such places like Atlas Coal Mine and seen at Medalta in the Historic Clay District in Medicine Hat.

Visiting other spots in Alberta? Check out our extensive guide for all the things to do while visiting Banff, Edmonton, or Drumheller!

ALSO, don’t forget that while you’re on the road, you can download our FREE Road Trip Alberta bingo cards, to make it just that much more fun!

We've created THREE Alberta specific bingo games to make your road trip even MORE fun. Included are some insider tips on what to see and eat in the province!